This Season we are privileged to have among our members a swimmer from the Canadian Team for the World University Games 2019, Ainsley McMurray.  When we found out that she was joining the Dolphins this season we wanted to invite her to share her experiences as an elite athlete with the children and so we will be announcing some sessions that Ainsley will do with the children in their groups this summer.
Ainsley has been swimming and been friends with many of our Dolphins athletes who train at the winter team of Cote Saint Luc Aquatics.  She is currently studying Environmental Biology at University of Toronto and is a member of the U of T Blues Women's Swim Team roster, one of the best university teams in Canada and a team that one of our past esteemed head coaches, Taylor Bond, also competed for.
Like many athletes, she started out small, had fun with summer swimming and fell in love with this sport which has taken her around the world and to exciting places. Read her autobiography below and watch for details of her visits to practices with the children.  You will also spot her competing at some of our meets this summer, when she is in town. 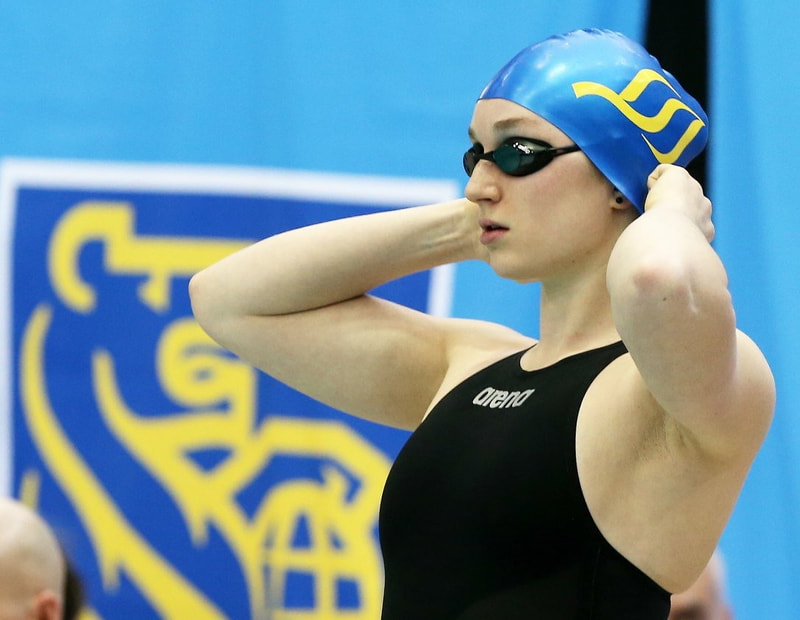 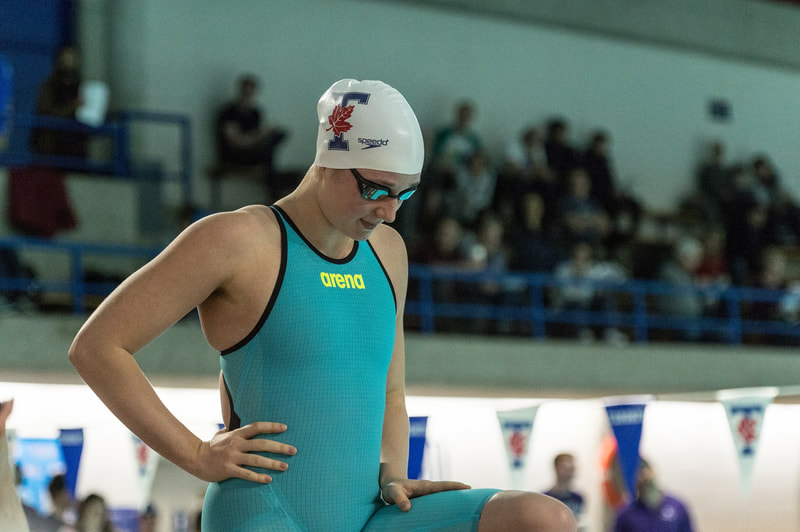 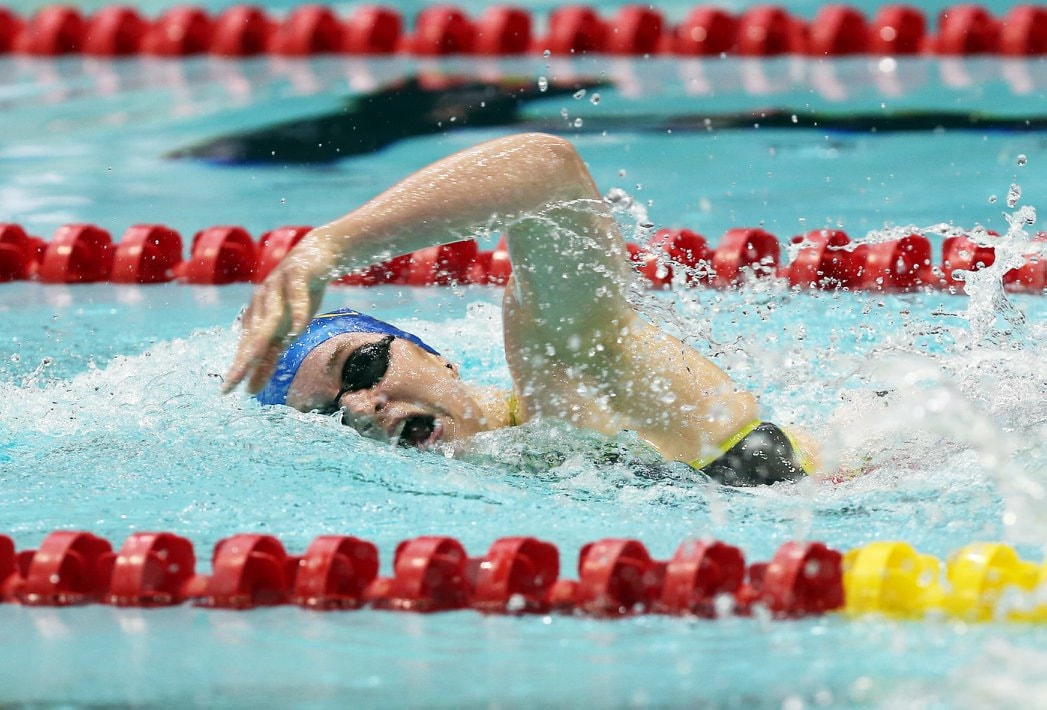 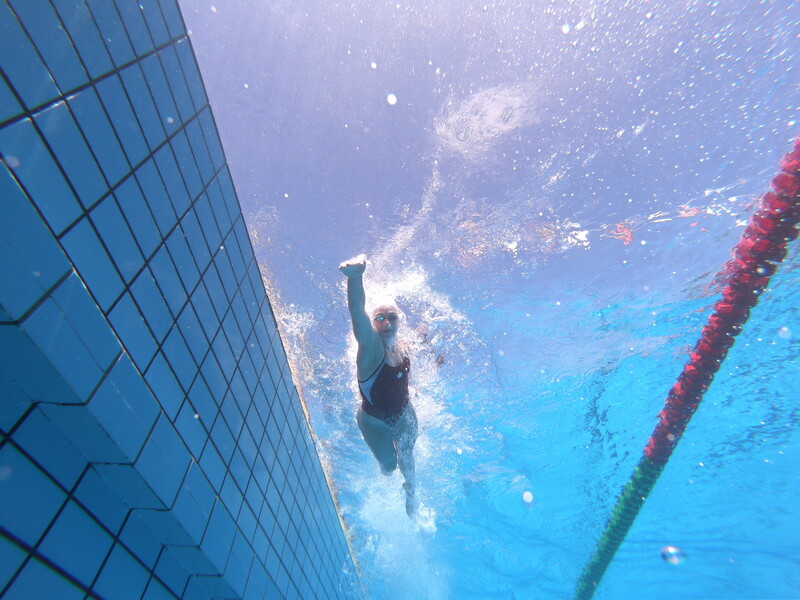 I started swimming competitively at 8 years old with a small club called CASO. After experiencing summer swimming at Cote-Saint-Luc outdoor pool in the NAA league (similar to the ALPS league that Dolphins belong to), I changed to the new winter club that opened there when I was 11 years old, the team Cote Saint Luc Aquatics. I have been swimming there ever since. When I first joined CSL, I was barely a provincial AA level swimmer but by the end of the year I had achieved times to be a provincial AAA swimmer! I never had amazing success as a kid, I was never a child prodigy. I swam at the provincial AAA level until I was 14 then finally qualified for my first national competition.

I went to junior nationals that summer, very keen on having my first national experience but swam quite poorly. I did not even qualify to a final. After that disappointment, I started to refocus my training and really take swimming seriously. I started training more often and working harder in practice. The following summer, I qualified for senior nationals and won a medal at the Eastern Championships. That is when my swimming career really took off. At 16, I had qualified for the Olympic Trials where I even made it to a final. I was invited to be part of the national development team the following year. I was able to be apart of many Team Canada training camps and meet people from all over the country, coaches and swimmers alike.

During the summer of 2017, I won 3 medals at junior nationals (two of them gold) and set a Quebec provincial record. However, I came just shy of making the national junior team. That disappointment propelled me into my most successful years of swimming. In 2018, I qualified to represent Canada for the first time in Fiji at the Junior Pan Pacific swimming championships. At this meet, I won three medals with the Team Canada relays.

In the fall of 2018, right after the Junior Pan Pacs, I faced my hardest challenge. I moved away from home to pursue my swimming at the University of Toronto where I am studying environmental biology. Surrounded by an amazing support staff, coaches and friends, I managed to overcome a shoulder injury and the ups and downs of getting used to a new program. At the University championships, I set 2 national records with the Toronto relay team which allowed me to be considered a first string all Canadian, a high achievement in University swimming. Based on my performance at the University championships, I qualified for my first senior national team: The World University Games in Naples, Italy this summer. Occurring over 7 days at the beginning of July, I will be competing for Canada for the second time but this time at the senior level.

These amazing experiences have shown me how important the people you encounter in your swimming career are. Even in ALPS summer swimming at the Dolphins, coaches and parents shape the swimming experience of children. I know my love for the sport is heightened when swimming in a dual meet during the summer--in the end swimming is just so much fun. I hope this summer to be able to share my experiences with the younger generation through a series of clinics with the Westmount Dolphins.